In 2007, Tim Ferriss published his first and most well-known book, The 4-Hour Work Week. The book is set against the backdrop of Ferriss’ journey as a founder working 14-hour days to build his nutritional supplements business. Ferriss’ startup took over every aspect of his life, causing crippling stress and anxiety. Afraid he’d work himself to insanity or death, Ferriss took an eight week trip to Europe, resigned to the probability that his business would fail without him there. But a strange thing happened. His business ran fine without him, “better than ever,” and allowed him to turn eight weeks into fifteen months abroad in Europe, soaking up culture, food, music, and more.

Ferriss’ initial problem isn’t unique. Entrepreneurs and small business owners know how hard it is to leave the office. Like Ferriss, many feel their business will crumble without them, but a new startup in Provo aims to help founders claim some personal time back for themselves.

“We have a Coconut VA challenge; within 90 days of getting your VA, go on vacation and leave your laptop at home,” says Espinosa. “We find it resonates with a lot of people, because that's the epitome of being able to let go of the office.”

The idea for Coconut VA came together as Espinosa and Leber worked with clients in their first startup, Venture Validator, which they still operate in tandem with Coconut VA.

A Startup to Launch Startups 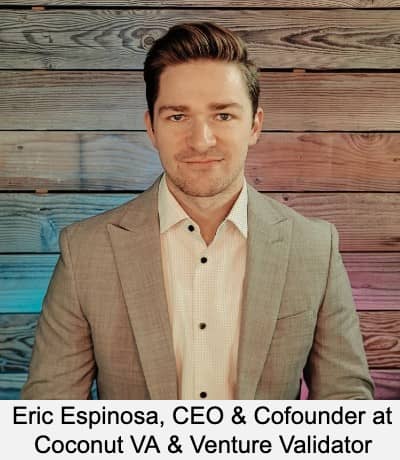 “I was a BYU student a couple of years ago,” said Espinosa. “I had an expiration date barcode add-on business, won $25,000 from competitions, and got $650,000 in investment offers. But I knew I hadn't completely validated my business idea. Raising money is not validation, winning competition money is not validation… So I went and continued validating, and in 40 days invalidated the idea. Where Venture Validator starts is I had $25,000, but no startup to put it into. So I wanted to test the very best ideas. I had lots of ideas.”

“Consulting is not scalable, and I will not get pinned into something not scalable,” says Espinosa. “I doubled my prices to get customers to go down, but people still kept coming. I was frustrated, so I quadrupled my prices, and people still kept coming. So I thought, ‘Okay, is there a way to make this scalable?’ Hence, Venture Validator was born.”

Venture Validator helps startups learn if their ideas have sufficient real-world demand through surveying. Espinosa says he “multiplied [BYU professor Gary Rhodes’ methods] by three, and put it on steroids into surveys.” Espinosa helps startups find 100-200 target market customers, then pitch their solution. Through surveys, they find out what features the target market wants, what their top objections are, and what price they’re willing to pay.

Leber started as Espinosa’s intern, though the two are close in age. The duo quickly realized they worked well together and became full partners. After Leber graduated from BYU in August 2020, he joined the company full time. 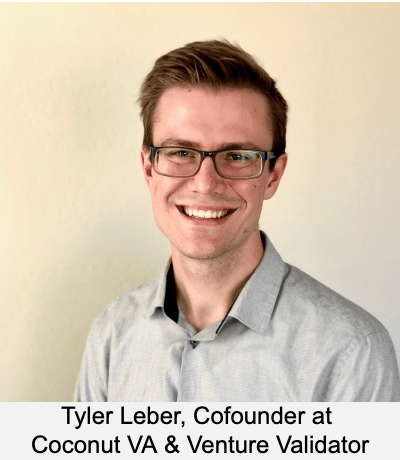 “We've been preaching to a lot of [Venture Validator customers] saying, ‘Hey, this is how you source [Filipino VAs] and this is how you train them,’ and nobody did it,” says Espinosa. “They don't know where to find them... Hiring in the US sounds like a headache, so trying to hire someone from the Philippines sounds like a huge headache.”

Espinosa and Leber helped one Venture Validator client follow through and hire a Filipino VA. After a month, they reached out to see how she was doing.

“She wrote us this raving email saying, ‘Oh my gosh, this is the BEST DECISION I’ve EVER MADE!’ in all caps,” says Espinosa. “As product market fit researchers, we know that’s huge. It’s easy to find 100 customers that like you, but it is so hard to find 100 customers that love you. And here's our first customer, just absolutely loving what we did.”

That success of one VA with a Venture Validator startup pushed Espinosa and Leber to create Coconut VA.

Coconut VA caters to entrepreneurs with little time. The company does all the hiring, payroll, legal, and benefits, making it easy for people to hire a virtual assistant.

“We hired a 19 year old with very little experience,” says Espinosa. “We've had her do graphic design and Facebook ads. After a four day course, she was better than any of the BYU students at Facebook ads.”

From the virtual assistant side, Filipinos are also excited about the opportunity. Espinosa and Leber come to potential hires with the same approach they’d have for American employees. They offer benefits, a 13-month bonus, and a promise that Coconut VA will not cut pay if an employee drops them, treating them as equals to American employees.

The many small tasks a VA does help startup CEOs have peace of mind. They can disengage and disconnect from their business after regular hours. Outsourcing assistants are also very affordable. Instead of paying for an American assistant, which annually costs anywhere from $40K to six figures, a Filipino virtual assistant would likely be less than half that amount, starting at just $10 an hour, with very flexible bandwidth and hours.

“Our client from July just went on vacation without her laptop, and she was raving, saying, ‘This was the first time I've ever been able to do that’,” says Espinosa. “Go try a virtual assistant, and see how you can outsource your life. We're looking for VAs that have a relationship with their US employer for years to come.”