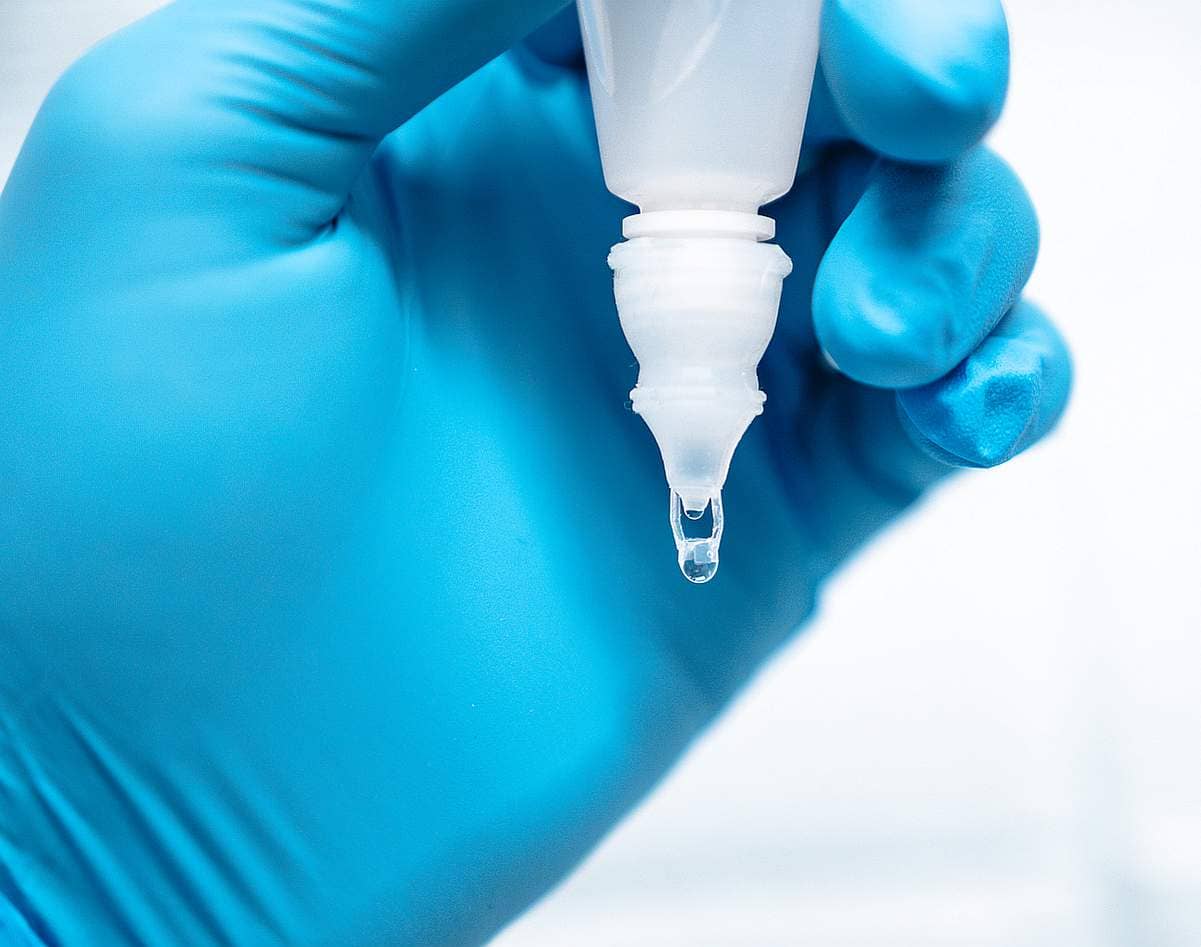 Eye drops are medicine, and they can be costly like pills or injections. Eye drops can relieve dryness and irritation, treat glaucoma, ocular inflammation, allergies, and conjunctivitis (pinkeye). Eye drops are also prescribed after cataract surgery to reduce inflammation and prevent infection. The problem is eye drops are three to five times too big for the eye, causing excess fluid to overflow and run down the cheek, leading to waste and money down the drain. Precision Drop’s state-of-the-art technology eliminates the problem entirely. 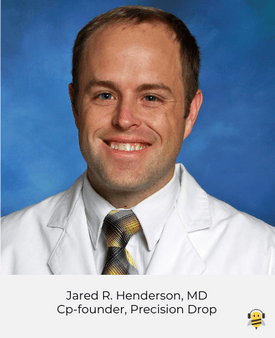 If you’ve ever used eye drops for contacts, dry eyes, allergies, after eye surgery, or for a medical condition, it’s certainly made a mess at some point. That’s because drug companies make eye drops too big, and insurance companies and ultimately, consumers, are shelling out the dough for the senseless waste, irritating many medical professionals who know what’s up.

Fortunately, the wet mess doesn’t necessarily mean you missed your mark, but the bad news is the mess that ran down your cheek was by design—and it’s no secret to drug companies driven by big profits. Eye drops spill all over because drug companies make their drops—from OTC lubricant eye drops for contacts, to redness eye relief lubricant drops, to dry eye therapy drops, to expensive glaucoma medications—much larger than what a human eye can hold.

A doctor trying to help his patients

The idea for Precision Drop originated from Jared R. Henderson, MD, a doctor specializing in family medicine in Twin Falls, Idaho. Dr. Henderson is big into the psychology of medicine,  specifically how we can alleviate unnecessary barriers to promote patient heath.

Early on in his practice, he noticed that a lot of his patients were not taking their eye medication. First he looked at existing methods but none had the convenience factor he was looking for. Then one day, he noticed water droplets on flowers, and thought what if we could harness nature's droplet technology and place perfectly sized eye drops. Precision Drop is not just making eye drops easier, they are changing how we do them entirely. 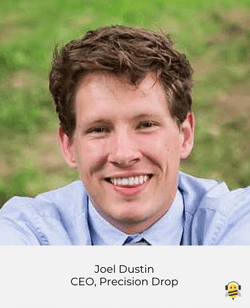 In June 2021, Dr. Henderson was introduced to Joel Dustin, a mechanical engineer with a love for innovation. Dustin came on board to consult for Dr. Henderson, but with Dr. Henderson’s busy medical practice to tend to, he later asked Dustin to team up with him on Precision Drop so Dustin could work on the business full time.

Dr. Henderson knew people needed an “easier” eye dropper, but didn’t know how to invent one, and that’s where Dustin came in. With his background, Dustin had the experience and skillset to help Dr. Henderson develop the technology.

Dustin had recently invented and patented a helmet buckle that could be attached and released with one hand. Dustin also had recent experience conducting research in biological engineering—working on microfluidics and experimental surgery techniques. Additionally, he co-authored a paper that was published in the Journal of Hand Surgery. Between Dustin’s experience in academic writing, working with doctors, and small droplets—he was the ideal candidate for the job.

As Dr. Henderson was busy running his medical practice, it was up to Dustin to get the Precision Dropper off the ground and into the market. After doing research, Dustin realized the only way he could figure it all out is if he could get to a place that supported entrepreneurs and startups like Atwood Innovation Plaza at Utah Tech University in St. George, Utah.

In January 2022, and with Dr. Henderson’s blessing, Dustin quit his full time engineering job and moved to southern Utah to work on Precision Drop with the help of the Atwood Innovation Plaza. For the next six months, Dustin would create a prototype then gather feedback from ophthalmologists, friends, grandmothers, anyone who would give him the time—then use that and apply it to the next model.

“Designing something that everyone liked was tough, but looking back I am so appreciative of the feedback because we really have something amazing now,” says Dustin. Precision Drop has had 36 recorded versions to date and now, Precision Drop is on its way to saving insurance companies and consumers big money by eliminating the insane waste associated with traditional eye drops.

According to Dustin, between 75 and 93 percent of eye drop medications are wasted because eye drops are three to five times too big for the eye. Administering eye drops is difficult. Depending on your skill level, it can sometimes take three to five attempts, explained Dustin.

“The cohesion principle allows Precision Drop to produce the perfect-sized drop, via the medical-grade polymer hoop, avoiding attraction or contact with other surfaces,” says Dustin. “The principle of adhesion allows the drop to migrate to the existing moisture in the eye, completing the process. No more waste and no more tears.”

“In 2022, Americans spent $165 million on prescribed glaucoma medication. With these numbers, we wasted $124 million dollars,” says Dustin. Adding, “That’s only for glaucoma. Knowing that, we want to introduce a solution—Precision Dropper.” With Precision Dropper, the drops are one-third the size. A single bottle of glaucoma eye drops runs on average $200-$400. Precision Dropper results in significant savings that can be passed on to the insurance company and/or consumer.

How does Precision Dropper work?

Precision Dropper is a universal, medical-grade silicone piece that attaches and stretches to fit any eye drop bottle, from cheap Visine to an expensive bottle of prescription glaucoma medication. Precision Dropper was also designed with safety as its number one priority. It’s  manufactured with a soft, flexible tip designed to deflect at the slightest amount of pressure. 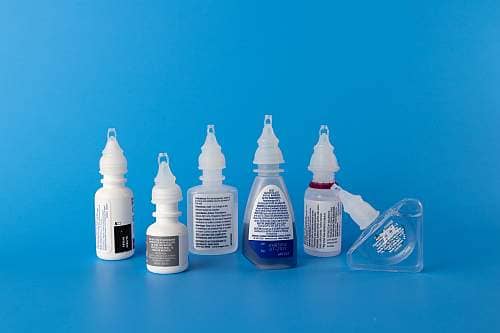 It is reported that half of all of eye drop users touch the eye dropper tip to the eye when applying eye drops. This is dangerous because it can result in contaminating the whole bottle or creating small abrasions on the eye itself. With Precision Dropper, these two risks have been almost entirely eliminated.

Up until the Precision Dropper, traditional eye droppers were resulting in a lot of waste, frustrating ophthalmologists, glaucoma experts, patients, and insurance companies alike. One doctor by the name of Dr. Alan Robin had patients who were struggling to make their pricey eye drop bottles last. Dr. Robin even took it upon himself to urge drug companies to make the switch to smaller drops, but his pleas fell on deaf ears, according to ProPublica.

“They had no interest in people and their pocketbooks, or what the cost of drugs meant,” said Robin, a Baltimore ophthalmologist, researcher and adjunct professor at the University of Michigan Medical School.

Doctors and consumers can’t necessarily change drug manufacturers’ motivations or behaviors, but they can invent cost-saving solutions like the Precision Dropper, which is exactly what Dr. Henderson and Dustin set out to do, and they succeeded.

Not only does Precision Drop make eye drops more affordable and easier to administer for people of all ages, it’s incredibly helpful for folks who have difficulty tilting their head back due to spine fusions and other neck injuries—it’s also a game changer for seniors, veterinarians, and pet owners who find eye drops more awkward and challenging than most.

Precision Drop has been gaining traction in Utah. In September 2022, it won first place at Atwood Innovation Plaza’s Innovation Pitch Competition, and in October 2022, it was a finalist at the State Bank Business Challenge held at Governor Cox’s 2022 fall One Utah Summit at Southern Utah University.

Precision Droppers are being sold on their website at precisiondropper.com, and in local pharmacies in southern Utah.