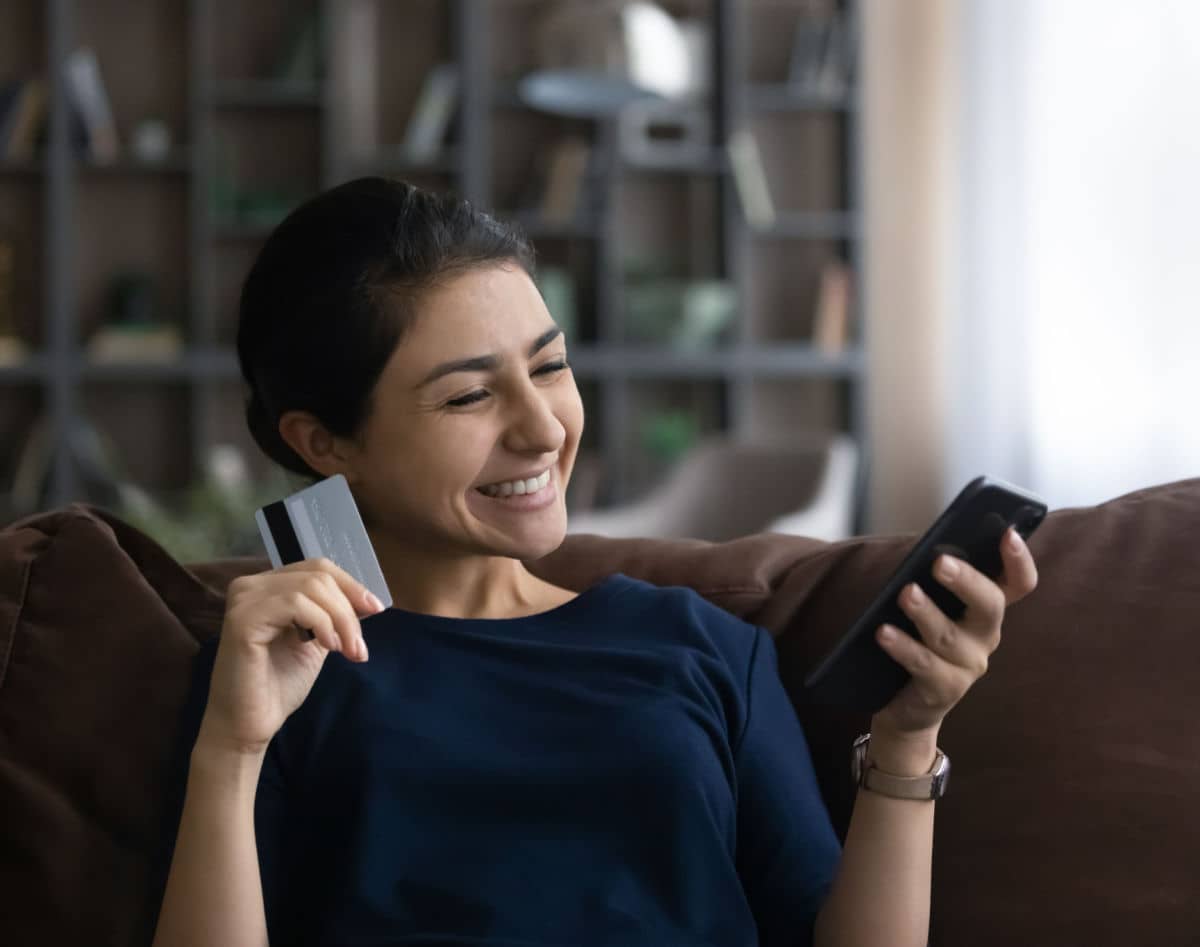 Bestie Helps Companies Be Best Friends With Their Customers

A new Utah startup wants to recreate the sense of connection back when regulars would walk into a mom-and-pop shop and be treated like an old friend—a bestie, even. 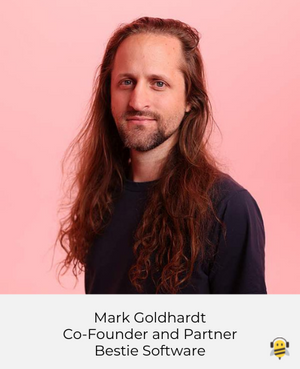 Trevor Crump and Mark Goldhardt worked together in ecommerce and digital marketing for various companies. They have a combined total of about 15 years of experience in the field. And through the years, with every company, they saw the same issue: customer engagement.

“It's become a very big numbers game for a lot of companies, but they're losing sight of who they're serving and what problems they are trying to solve,” Goldhardt told TechBuzz.

He explained that the impersonal nature of ecommerce was affecting marketing strategy, which needed to be much more personal—looking at people as people rather than data points.

Goldhardt and Crump created Bestie Media in 2020 to try to solve that problem. When they started creating customer surveys in the transaction confirmation emails after a customer bought a product, things started to change. 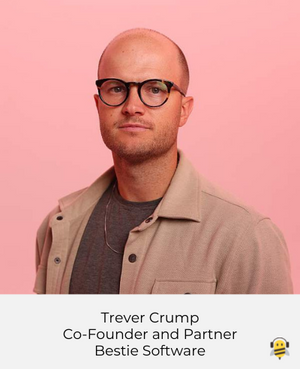 “The moment Mark and I started doing that, that's when we really started moving the needle and growing our brand in revenue. Because now, instead of putting all of our money into Facebook, we would take some of that out and re-allocate it,” Crump said.

About a year ago, the partners decided to automate those surveys and dive into the customer insights. In August, they brought on Dan Conger, an early engineer at Podium, to be a co-founder and the company's chief technology officer. The team launched the Bestie app on Shopify on October 26, 2022.

With a one-click install, the Bestie app allows small business owners to get to know their customers and engage with and cater to them individually. It also allows businesses to see which ads are performing and which ones are not. It mostly integrates with Shopify and WooCommerce but can be integrated into any personal business website, as well. Bestie creates a quick, customizable survey on the “thank you” page after a customer buys a product online. Marketers can create open-ended questions, as well as multiple choice and ratings. 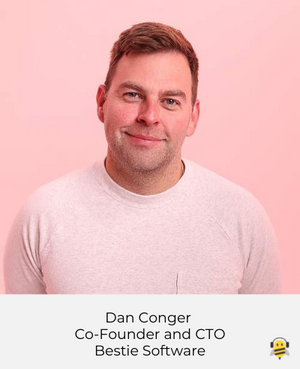 The surveys usually begin with questions like, “Where did you first hear about us?” and “What brought you to the website?”

While the concept of these surveys isn’t new, smaller businesses might not have the capacity to build surveys like these into their site. With Bestie, it only takes one click to add the app to their Shopify.

“It’s very uncommon for these smaller companies to collect customer data because it’s very time intensive. It’s a big effort to do it. But Bestie can bridge that gap and make it very easy for even the smallest of businesses to get to know their customer and build their company around their customer instead of just guessing,” says Goldhardt.

Traditional surveys don’t allow business owners to create individualized question paths for each answer for the survey. For example, a typical survey would ask “Where did you hear about us?” and no matter the answer, the next question would be the same.

In contrast,  using Bestie, business owners can control the flow from question to question. If a customer answered that they found the company through TikTok, the next question would be “Where on TikTok?” The listed answers could include ads, influencers, or the company’s own account. 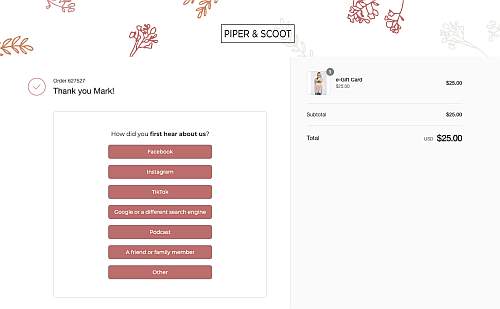 Then, if the person answers that an ad brought them to the company, Bestie presents the customer creatives for each ad. The customer can then easily select the ad they saw and interacted with. The Bestie-enabled marketer determines with little effort which ads were most compelling to customers. If the customer selects “influencer,” Bestie can bring up images of the different influencers so the company can know which influencers are bringing in the most customers.

And marketers also have the opportunity to add incentives for filling out the survey, like a discount code.

Bestie has a merchant portal where marketers can view and edit a flow chart of all the different survey questions and answers. This section of the app lets businesses select where they want to publish the survey and which audiences they want to share it with. 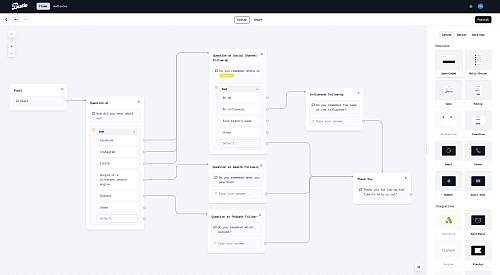 Bestie also presents the data in a digestible way so businesses can see which methods are reaching their customers best, including which ads have performed best, and spend money in the right places to grow their customer base.

“A lot more people are going to fill it out than you'd actually assume,” says Goldhardt. “You can not only capture nuances from customers, but it's creating an experience that people actually want to engage with.”

He added that business owners can even make thank you videos or intro videos for the survey, to create a more personal connection with the user, offer tips, and instruct the user on very specific aspects of the purchased product.

Businesses can also use Bestie to adjust their marketing plans. For example, if you’re selling a product that doesn’t need to be replaced frequently, you could ask “which other products would you like to see?” Or you could get feedback on the color or style of the product.

Because Bestie can include multimedia, marketers can even show renderings of what the proposed product would look like. “It’s a focus group,” says Goldhardt. “The product market research is right there, and you don’t even have to pay for it.” 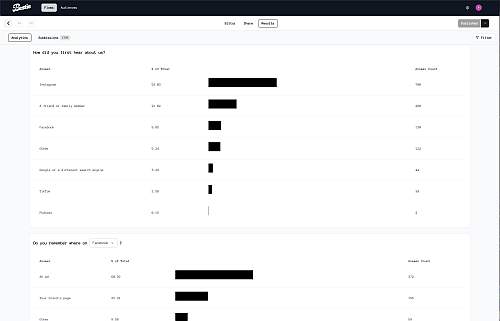 Crump adds that customer-centric feedback is “the beauty of Bestie;" it is an easy way to give customers the opportunity to voice their opinions when the decision to purchase is fresh on the customer's mind, mere moments after the purchase.

The service currently costs between $49 and $249 a month, depending on the store size. But over time, the owners are hoping to change the tiered pricing model to one based on impression or revenue generated.

Bestie's founders have bootstrapped the company during its 6-8 month build process. "So far the company has been completely bootstrapped, but because of the interest level in it, and to make room at the table, we're starting to look more into pre-seed fundraising," says Goldhardt.

On Shopify, Bestie's launch has been soft in order to beta test it, gather customer feedback, and to determine customer support levels needed. Since launch, Bestie has gained over 30 customers within a handful of weeks. Once Bestie rolls out on a larger scale, the founders plan to evolve it into a full customer service platform that could offer customer interaction throughout the site, like games or quizzes. "We're already posting revenue after a very soft launch a few weeks ago," says Crump. "Now we're understanding what the support is going to look like with customers and then we'll start to go a little bit more to the moon with it."

Jenny Rollins is an award-winning writer, editor, and content producer. Jenny is a senior editor for Business.org and manages her own freelance writing and editing business stories.